Michael Merriam is a writer, performer, poet, and playwright. He is the author of the steampunk series Sixguns & Sorcery, and his essays have appeared in Uncanny Magazine, Cast of Wonders, and Andromeda Spaceways Inflight Magazine. His scripts have been produced for stage and radio, and he has appeared in the Minnesota Fringe Festival and StoryFest Minnesota. Like most artists, he has worked a variety of odd jobs over the years, including short order cook, late night radio disc jockey, international freight specialist, and manager of a puppet troupe. He lives in Hopkins, MN with his wife and two exuberant cats. Visit his website at www.michaelmerriam.com. 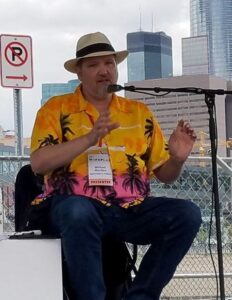