We’ll be releasing new editions of Death by Silver by Melissa Scott and Amy Griswold in 2023 and the sequel, A Death at the Dionysus Club, in 2024. 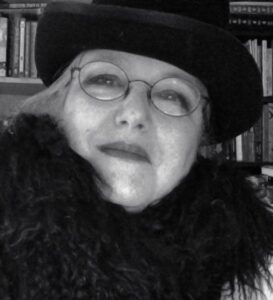 Melissa Scott is from Little Rock, Arkansas, and studied history at Harvard College and Brandeis University, where she earned her PhD in the Comparative History program.  She is the author of more than thirty original science fiction and fantasy novels, most with queer themes and characters, as well as authorized tie-ins for Star Trek: DS9, Star Trek: Voyager, Stargate SG-1, Stargate Atlantis, and Star Wars Rebels. She won Lambda Literary Awards for Trouble and Her Friends, Shadow Man, Point of Dreams (written with her late partner, Lisa A. Barnett), and Death By Silver, with Amy Griswold.  She also won Spectrum Awards for Shadow Man, Fairs’ Point, Death By Silver, and for the short story “The Rocky Side of the Sky” (Periphery, Lethe Press) as well as the John W. Campbell Award for Best New Writer.  She was also shortlisted for the Otherwise (Tiptree) Award. Her latest short story, “Sirens,” appeared in the collection Retellings of the Inland Seas, and her text-based game for Choice of Games, A Player’s Heart, came out in 2020. Her most recent solo novel, Water Horse, was published in June 2021. Her next solo novel, The Master of Samar, will be out in 2023.