We’re pleased to announce that we’ll be publishing Minnesota author and literary agent Jennie Goloboy’s novel, Obviously Aliens on November 1. This will mark the official launch of Northland Speculations, our new line of fantasy, horror and science fiction by authors from the Upper Midwest.

What happens when Dana drinks the wrong soda on her way to Spokane? Before she knows it, she and Jay O’Toole are sharing the same body. Jay’s boyfriend, Adam, wants him back at any cost, and Dana just wants to find a new body for Jay so she can get to Spokane and pitch her new line of Doge of the Month models to Rainbow Daydreams.

To do that and stop the bad guys, they’ll have to embark on a wild and hilarious road trip where they’ll meet up with a lot of aliens, the clone of Dana’s dead rock star dad, evil plumbing executives and their minions, government agents and talking corgis. Will Dana manage to get Jay out of her head, sell her Doge designs and maybe meet a decent boyfriend? Can Adam turn his skills as a thief and a hit man into a force for good and settle down with Jay and Jay’s new alien pals? Will the aliens be able to rebuild their lives on Earth? What are the corgis up to? Hop in and ride along to find the answers to these questions and more! 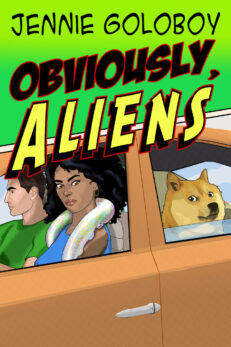