Scourge of the Seas of Time (and Space)

A anthology of pirate stories from the historical to the fantastical and beyond! Available in ebook and print.

Publishers Weekly says Scourge of the Seas of Time (and Space) is: “This anthology is a delightful cross-section of pirate tales, representing a diverse array of sexualities and nationalities, and shining a spotlight on tales that don’t fit common preconceived notions of pirate lore. It will appeal to fans of daring speculative fiction.”

Scourge of the Seas was selected for the American Library Association 2020 Over the Rainbow List.

Table of Contents and story descriptions:

Ginn Hale – “Treasured Island” – Can a pirate marooned on a gloriously fantastical floating island find himself again?
Ashley Deng – “The Seafarer” – A Barbary corsair returns from an alternate world to face old foes.
Joyce Chng – “Saints and Bodhisattvas” – A beautiful woman hires a pirate captain to track her father’s killer through the fabulous waters of the Golden Chersonese.
Ed Grabianowski – “The Doomed Amulet of Erum Vahl” – A heroic pirate and her lover are stalked by an unspeakable evil.   Can they stop the end of their world?
Mharie West – “The Serpent’s Tail” – A Viking family encounters greater perils than a simple raid.
Megan Arkenberg – “Between the Devil and Deep Blue Sea” – A wounded pirate risks capture by her greatest foe to save her shipmates.
Elliott Dunstan – “Andromache’s War – What happens when one of the widows of Troy can decide her own fate?
Geonn Cannon – “Rib of Man” – Captain Henriette Talmadge and her crew find an unexpected treasure aboard a ship they’ve taken.
Su Haddrell – “A Smuggler’s Pact” – A pirate ship’s second mate in a dire situation finds an unlikely ally in the swamps of Louisiana.
Soumya Mukherjee – “The Dead Pirate’s Cave” – A kidnapped child, an evil pirate and dangerous mechanical beasts make for a harrowing adventure!
Matisse Mozer – “Rosa, the Dimension Pirate” – How do you outwit a pirate when he’s taught you everything you know?
Caroline Sciriha – “A Crooked Road Home” – Can a young space pirate find redemption?
Peter Golubock – “After the Deluge” – Sail the former streets of post climate apocalypse New York City with Captain Teresa Chang and the pirate crew of the good ship Pizza Rat!
Michael Merriam – “Tenari” – A pirate crew tries to save a space freighter full of children from a terrifying creature.
A.J. Fitzwater – “Search for the Heart of Ocean” – Captain Cinrak the Dapper takes her crew on a quest for a jewel out of legend.

14 reviews for Scourge of the Seas of Time (and Space) 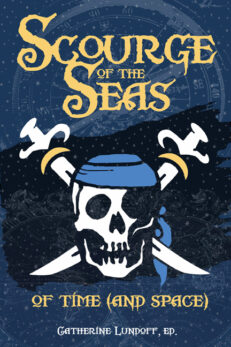 You're viewing: Scourge of the Seas of Time (and Space) $5.99 – $15.99
Rated 4.00 out of 5
Select options
This website uses cookies to improve your experience. We'll assume you're okay with this; if you are not, please close this site in your browser. ACCEPT
Privacy & Cookies Policy